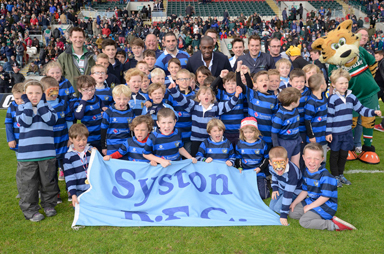 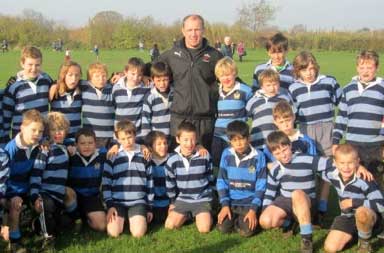 Well that an eventful day today at Lutterworth as our MIGHTY MIGHTY SYSTON under 10s team make it throug to the finals to be played at Tigers ground on the 1st Dec before the Bath game.

I must say that we were very proud of every singly one of the team who battled their hearts out in very difficult cold and wet type conditions.

In the first game we were up against Oakham who were good…but not good enough for our fired up team. It was Connor Foster who scored the first try followed up by our powerhouse Nat who was just unstoppable. We finished this game 2-0 which was a great confidence builder.

Onto game 2 and the conditions were getting worse even the brass monkeys went home ! But not our strong supporters, coaches and squad who played a well organised Leicester Forest East team. Great tries from Tom Page and Cieran Boylan saw us once again play some lovely rugby winning the game 4-1.

As conditions got even more difficult we went into our final game against a strong Sillhillians team from Solihull who won the trophy 2 years ago. We knew that it would be tough but all we needed was a draw to see us through to a final at Welford Rd . They came at us with some big strong boys but George Barker smashed them back and was knocking over the big guys all over the park. At full time it was 0-0 which meant that we had won our league and will now play at Leicester Tigers on the 1st Dec before the first team match against Bath.

When we get back into the changing rooms the singing and dancing was something I will never forget .. more tears from grown men than I have ever seen (Joe)!

The Mighty Mighty Syston chant was in full swing as will be the Guinness in Blackpool.

We will now have to work even harder at training next week to ensure that we continue to improve and have a chance to be crowned as Prima cup winners !!

Thanks very much to all of you who braved the terrible weather today….but boy was it worth it!!!

What a great game at Oakham away today and a huge thanks must go to their team and coaches who made us feel very welcome and played the game in a honourable manor. The club house was pretty special and I know the boys (and Rob) loved the hot dogs – go on Shirley !!!

The boys really started well and were in complete control for 3/4 of the game. It was fantastic to play on a full pitch and I bet they will all sleep well tonight. Josh Shooter was on full throttle today and ran in two tries to give us a big lead going into half time. We looked great and both Harrys did some great work : Harry C was in all the action and Harry B just seems to go from strength to strength. Archie Heaney had an excellent game at 8 and made the second try for Josh. It was all his hard work which opened the door for the team. George Barker was once again all over the pitch and gave us a 19-0 lead going onto the final quarter. For some reason we then switched off and let Oakham back into the game, missing tackles and before long it was 19-14.

Thankfully we worked hard and finished the game off without conceding again. The boys worked very hard today and it was great to see them finish off winning a tough game on a full size pitch.